I have read a lot of research papers, articles, books, magazine articles, and blog posts about math education and find it impossible to keep them all straight. Writing a review helps me process and remember the main points and gives me something I can look back on. I hope it helps you too. Check out all my reviews. 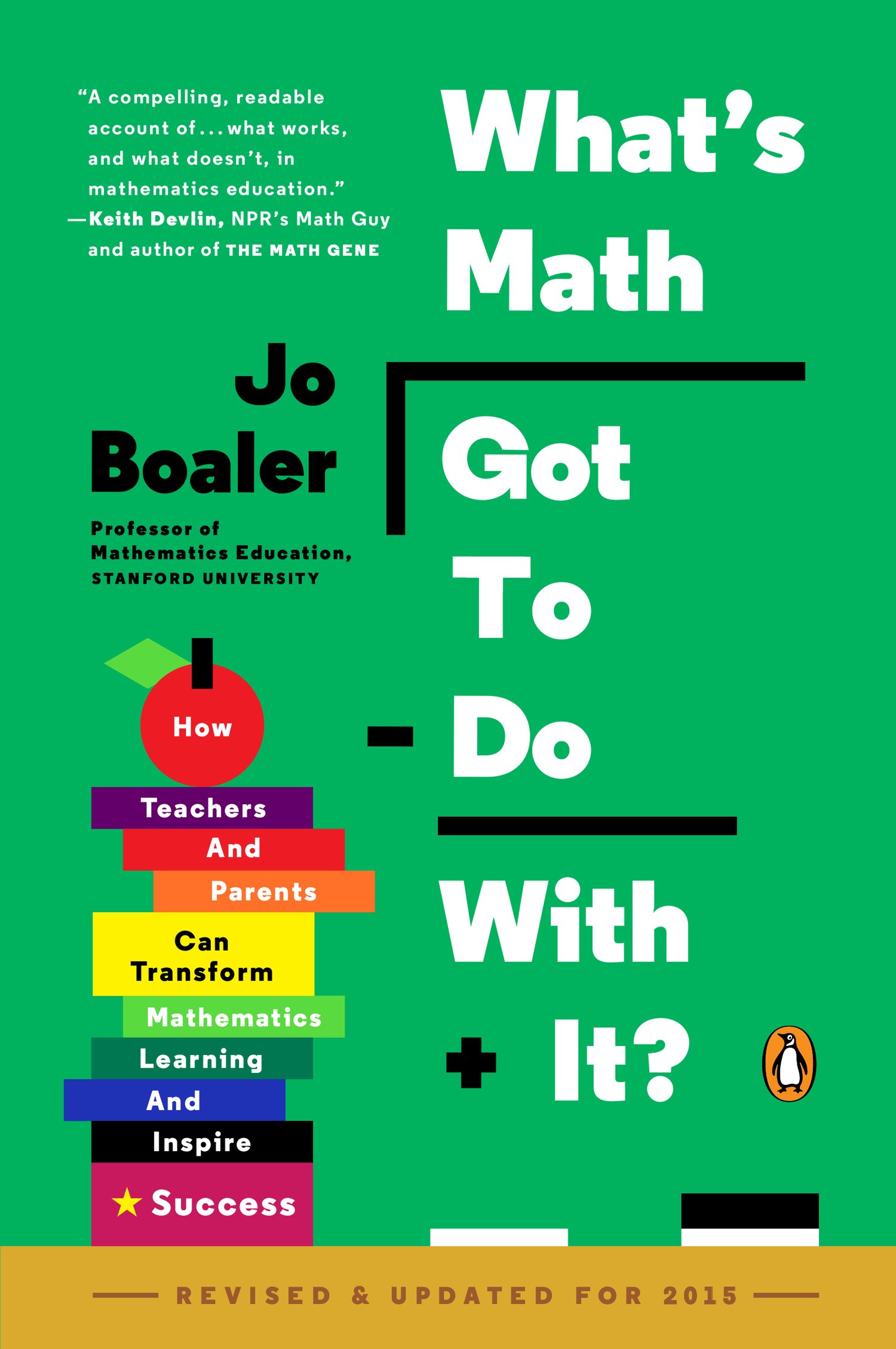 What's Math Got To Do With It? is the hot math book of the moment, and author Jo Boaler is a current superstar of the math education world. Originally from England, Boaler moved to the US in 1999. Despite outrageous harassment from a pair of Californian mathematics professors, she has made a name for herself as a promoter of best practices in math education. What's Math Got To Do With It? is her attempts to synthesize research and present it in an accessible way to parents and teachers to improve the quality of math education in this country.

She highlights many of the well-known issues in math education: the ineffectiveness of lecture and rote practice, over-emphasizing summative assessments particularly multiple choice tests, tracking students by ability, and reduced expectations for female students. Along the way she make a mostly well-articulated case for how to improve math education in the United States.

I mention the US specifically, because this book is clearly written with the United States education system in mind. While some of Boaler's research took place in England -- including her significant longitudinal studies -- the book begins by raising alarms about the US's performance on international tests. In the book Boaler contrasts the practices of more successful countries (such as Finland and Singapore) with the practices of the United States. Rather than go through all of the ideas of the book, I want to share some of the big points that struck me as interesting or particularly well-argued.

In discussing why many students see school math as useless, Boaler discusses ways in which students develop the idea that math is not applicable to their lives. She blames this partially on the idea of psuedocontexts. A psuedocontextual problem is one which applies mathematics concretely but does not allow students to rely on any of their real-world knowledge. For example, if you can buy a 1/4 of a pizza for $4 how much would a whole pizza cost? In the real-world, we know that buying larger quantities of food means paying a reduced rate, but as Boaler explains "none of this matters in Mathland."[16]Page 52 Dan Meyer is making a similar case in his talk on modeling which he has made available for free and is great.

I was unfamiliar with the concept of psuedocontexts prior to reading this book. I definitely understand her point and appreciate the way in which it can contribute to unproductive student beliefs; however, I am not sure I agree with the idea that contexts "should only be used when they are realistic and when the contexts offer something to the students, such as increasing their interest or modeling a mathematical concept."[17]Page 53 Maybe I am splitting hairs, but I think psuedocontexts can still be used beneficially as long as time and attention are spent helping students become aware of the assumptions their are making. Nearly any modeling of the world using elementary mathematics is going to involve assumptions being made; we just need to make sure that students are thinking about them.

While discussing the United States commitment to standardized testing, Boaler dropped this bomb:  "It is hard to find a single multiple-choice question used in Europe--in any national assessment, in any subject, at any level, in any country--yet almost all of America's test questions are of a multiple-choice format."[18]Page 65 I found this to be shocking. I am not as familiar with testing practices because I work at a private school, but this section of the book contradicted some of my prior understanding.

My understanding is that no one had been able to develop a test that measures real student understanding that can be used widely and at a reasonable cost. Does this mean that Europe has a solution to this problem? Or, are they just testing so much less that the costs are relatively much more minor. If anyone has a recommendation for further reading on this topic I would great appreciate the reference.

One point she makes well is that percent and/or letter grades cannot go on tests for feedback to be constructive. She cites a study in which children were put into three groups.[20]She cites a study by Ruth Butler from the Hebrew University of Jerusalem. The description begins on page 99. One group received traditional grades, another received only comment-based feedback, and a third received both types of feedback. Unsurprisingly the students who received comment-based feedback outperformed the students who received traditional grades. However, the group receiving ONLY comments outperformed the group receiving BOTH comments and grades.

This fits with my experience with standards-based grading. I found that students and especially parents will gravitate towards the grade and ignore the feedback. Removing the grade forces them to engage with the feedback and standards in order to understand how they are progressing. Here are three additional quotes from the chapter that are great:

"When students are sent a label telling them where they stand compared to other students, rather than where they stand in their learning of mathematics, it offers no helpful information and is harmful to many students."[21]Page 90

"Diagnostic comment-based feedback is now known to promote learning and should be the standard way in which students' progress is reported."[22]Page 100

"Importantly, students should be given information that refers to the content area being assessed, not to other students."[23]Page 101

Boaler's argument against tracking in chapter 5 was the strongest part of the book. She outlines a clear case against tracking students by ability. I'll allow her quotations to demonstrate:

Boaler does a wonderful job of clearly outlining the case for eliminating tracking. She shows how it could help the US improve its math education, but also how it would benefit all students including the high achievers. If you are making the case for eliminating tracking at your school, I would highly recommend this chapter as a persuasive case that could be shared with colleagues, teachers, parents, and administrators.

This is a great book! I think it suffers some from trying to write for too many audiences, but it makes many important points clearly and in a way that is accessible to most. I definitely recommend that you check this out.

I teach 6th grade math and high school geometry at a New England private school where I also coach and tell corny jokes.

I like solving problems and learning about almost anything; I am currently working on JavaScript! Board games are great too. I also like to hike and sleep outside.

I somehow have a wife and a young Bernese Mountain Dog who likes to chew on coffee table books. I mean the dog not the wife. My wife doesn't chew on coffee...oh forget it.